Thank you very much for your generosity and warm hearts! Much love! Kah-Len

Cosmic federation Alliance Aka: The Federation of Worlds and the associated federation called The New Worlds Federation. 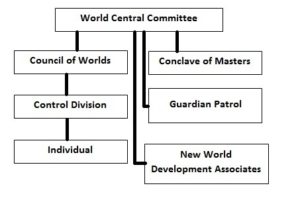 The ships under this alliance was donated to the cooperation and had crew from the same planet. There was a kind of friendly competition in getting new member planets to join the alliance, and especially earth right now.

The alliance has a police force called the Guardian Patrol.

Our mission is to protect the Alliance planets from hostile forces, and have free right to move to all planets and arrest possible criminals.

All things are in abundance on those planets and they do not use money – but use produced TIME (Man Hours) as a measure – not converting this time to money, which can be misused by others. If we here have this system, 98% of our crimes would be eliminated!!!

“Economic” system in federation: based on love+service (love in action)

It is a human birthright to share the abundance COMPLETELY FREE!!!

Their food is free to a standard we have fixed. We use “synthetic meat” as we no longer butcher animals for eating. It is wasteful, and the meat is not 1/10th as nutritionally beneficial as the synthetics. Also, the synthetics are free of harmful elements… ”

All of our production is automatic and thus no heavy manual labor. “The only people really involved in industry at the present are the technicians and engineers required to keep the equipment in top condition. Maintenance of the actual machinery is by robots designed for the purpose, and all machines are, in turn, designed for ease of maintenance. The original factories are built almost entirely by robots under the control of computers programmed for that purpose.”

All purchases in the alliance are registered in large computers. There are many private corporations and none are ruled or controlled by any government.

All education through tele-screen- transmitted to all the planets in the union from one learning center on a planet named Alitra in the system Alpha Canis Minoris (Procyon). 15 different channels- one per level. Equivalent 5h/day but only 2 “schooldays” out of 10.

Can use as much time as needed for passing tests/examination>individual learning-tempo. Some then twice as quick as others. Tests then made home as the learning else – on an internet-like system. Plus courses to be borrowed from libraries which are impressed directly into the brain/subconscious by electro-magnetic brain-waves.

Everyone “gets paid” for all studies.